The Impartio Books Program has been officially launched at the Minneapolis St. Paul airport at Gate G14 on Wednesday, May 13, 2015. I have no idea where this program will end up and the feeling of a “message-in-a-bottle” is what I have. (Update 01-17-2021 – This program failed) 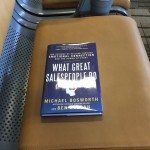 The first book left is a book that I very much enjoyed called, “What Great Salespeople Do” by Mike Bosworth. It’s about the power of story in selling and I hope the concept resonates with whoever picked the book up.

I used the nomenclature system that I described in the program introduction and left a note about my new project of Tic Tac Math Trilogy. It will be interesting to find out if I ever hear from anyone who reads this book and where it ends up.

One thing that surprised me a little bit was that when I left it, no one said, “Hey, you forgot your book.”