How Kickstarter Changed My Sister

Kickstarter is a crowd-funding platform to help entrepreneurs fund the start-up of their businesses. At least that’s what I thought it was until my sister, Patty Post, began a Kickstarter campaign on October 2, 2014 and ended it today, November 1, 2014.

What I learned from watching my baby sister participate in this program is that it is much more than just a crowd-funding source of funds for would-be entrepreneurs. To execute a successful Kickstarter campaign, I watched Patty refine her product’s value proposition, relentlessly promote the campaign through friends, family and contacts, stay positive when the odds were seemingly stacked against her, win through sheer persistence and maintain an unbending belief in what she is building.

For a bit of context, I referred above to Patty Post (Gaslin) as my “baby sister” because she is fourteen years younger than I and sixteen years younger than our older brother, Marty. I remember like it was yesterday when Patty was born. It was the afternoon of March 15, 1980, Marty and I were watching a hockey game on TV, our dad called (on a phone mounted to the wall where one of us had to get-up and answer the phone), I answered the phone and dad asked us if we wanted to come down to Methodist Hospital in Rochester, Minnesota to see our new baby sister. As I recall, my response was, “may we wait until the game’s over?”

We didn’t wait, we went to see Mary Patricia (Mary Pat as we called her at first) and being fourteen with a baby around the house turned out to be a unique experience. In many ways, we grew up more like relatives than siblings because of our age difference and the fact that Marty and I both left for college when Patty was very young.

As I’ve grown older, had four kids of my own and watched them grow up with an aunt who is only ten years older than my oldest daughter I have come to realize what a blessing Patty is to our family. Like anyone, she has her down moments, and I am always amazed at her ebullient spirit and drive to accomplish whatever she sets her mind to doing in spite of what may appear to be insurmountable odds. She’s a great wife and mother of three kids, too.

Now, back to the Kickstarter Campaign. 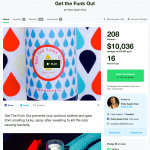 A successful Kickstarter Campaign for “Get the Funk Out!”

Over the years, Patty has worked to, as she puts it, “become the best version of herself.” I admire this quality about her and I have learned from it myself. Patty, our brother Marty and I all have a quality (This was passed down from our mom) that we don’t care much about what anyone thinks of us. We are fiercely independent, self reliant and positive people (We get this from our dad who was dubbed by his employees at one meeting that I attended as the “there’s nothing we can’t handle guy.”)

The sordid underbelly to all of this is that none of us are great at being told what to do, where to do it or how it should be done. We like to figure out things for ourselves, cut our own paths and share our successes with those that we love. This isn’t meant as bragging, it’s just how all three of us are so if you believe in the whole genetics and/or environment deal, we’re proof positive. And, trust me, personalities like ours have their downsides, too.

What’s really cool to me about watching Patty through this whole Kickstarter thing has been seeing her grow. When I think about it, it’s really been over the last couple of years, this campaign is perhaps the highlight of everything that she’s been working on and the springboard for creating the life for herself and her family that she has imagined is possible.

When the campaign first started, it came out fast and she was on-pace to achieve her funding goal. In the middle, she began to fall behind and this is where it got interesting for me as an observer.

The easy thing would have been for Patty to give-in and say, “oh well, I tried.” She didn’t do that. Instead, Patty kept pushing. She powered through the fear of failure and potential shame of having put herself out there and not reaching her publicly stated goal.

Instead of retreating in self doubt, new videos were launched via Facebook, she worked her contacts to gain more backers and remained laser focused on the goal that she had set for herself. Patty was relentless in her pursuit of achieving her campaign objective.

In the end, Patty won, her campaign is funded and her business is on its way. Whether Sweathouse Brands and Get the Funk Out become leaders in the fitness industry are not material to why I wrote this post. I hope that they do, because like all of us, Patty wants the things that come with success.

What I have enjoyed, admired and prayed for during Patty’s Kickstarter Campaign is that she stays committed to what she believes. Patty has done that, all while still being a great mom, wife, sister and all of the other roles that she juggles.

With all of my heart, I congratulate Patty on both her current win on Kickstarter and the successful future that certainly lies ahead for her.