A Road Trip With My Son, the World's Largest Ball of Twine and Service 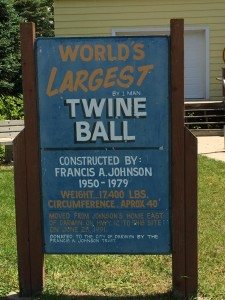 The World’s Largest Ball of Twine

How can these three things possibly be related in the same story?  Good question.

It was around Christmas time of 2001, I was in the Intraocular Lens Implant business so I was selling to ophthalmologists who performed cataract surgery.  I had developed a good relationship with a surgeon, Curt Wischmeier, for whom I volunteered to do a favor.

Curt lived (still lives) in Aberdeen, South Dakota, was an avid wine collector and was looking for an opportunity to buy a significant quantity of a brand and specific vintage of wine.   He was telling me about this particular wine during my last visit with him and I mentioned to him that my father-in-law, Dick LeClaire, was in the wine distribution business and that I’d see if I could find any of that for him.  The way that the wine distribution works, and who has access to what brand has baffled me since I met Dick and first started trying to understand it.

As luck would have it, Dick’s company did distribute this wine, but the full allocation of the specific vintage was already spoken for and delivered to the restaurants and package stores.   Being the master of service that he is, DIck found a store that had enough stock to meet the demands of my friend in Aberdeen.  He wanted 12 cases of the wine.

My ophthalmologist friend was excited for the find, sent me a check for the amount of the purchase and we began to figure out delivery.  This is where my son, Mike, and the world’s largest ball of twine come in to the story.

A bit of context.  South Dakota and Minnesota border each other with South Dakota being west of Minnesota.  Aberdeen, South Dakota is 275 miles due west of Minneapolis. The best way out there is a meandering highway called, Highway 12, where there are small towns about every 20 miles or so.  It truly is middle America and some of the most beautiful farm country that one could ever imagine.   Dr. Wischmeier, in his medical practice, satellites to seventeen of these small towns to bring his talents closer to the people who need them.  After all, his patients can’t see very well until he helps them so asking them to drive hundreds of miles to see him in Aberdeen is a struggle for some.  Through his many examples, I learned much about service from Curt over the years.

At the time that the wine delivery plan was hatching, Mike was eight years old.  The way that I had planned out the exchange was that I would pick-up the wine from Hennepin-Lake Liquors in Minneapolis, Minnesota and deliver it to Curt at a satellite office that he maintained in Milbank, South Dakota right on the border of Minnesota and South Dakota.

Because Mike was off of school for Christmas break, along with our three other kids (Grace, 12, Anne, 10 and Ben 6), I thought that bringing him along with me may give my wife, Jean, a bit of a break from the chaos associated with 4 kids 12 and under home from school and that it would be nice to spend the day with him.  The issue was convincing Mike that riding in the car with me for a day was somehow interesting and fun.  Here is where the world’s largest ball of twine comes into the story.

Darwin, Minnesota is a small town of 342 people approximately 80 miles west of Eden Prairie, Minnesota, where we live.  It is about 1/2 way to Milbank where Curt was working for the day and we had agreed to deliver the goods.  Darwin’s claim-to-fame is that they are the home of the world’s largest ball of twine.   Why Francis Johnson would undertake such a project for 29 years is beyond me, but hey, who am I to judge?

The planned day arrives, I go to the store and load up my Chevy Suburban with the wine, come home to pick-up Mike and off we go.  We’re not on the road too long when, as one may anticipate, I hear the first, “when do we get to see the world’s largest ball of twine, Dad?”  “Just a while longer, Mike, it’s going to be really cool and you’re going to love it,” I say to him.  Since we pass Darwin on the way out and the way back, I had neglected to factor this into my strategy.  Is it better to stop there on the way out, or the way back?  Luckily, fate solved my dilemma for me because Mike had fallen asleep when we drove through Darwin on the way out.

When Mike awoke, he quickly asked when we’d be there and I had to tell him that he had been asleep so I decided that we see it on the way back.  That wasn’t really the answer that he was looking for so I shifted his attention to the nice lunch that Dr. Wischmeier’s staff had arranged for us in Milbank.  This was okay with him and we talked about hockey, school and why we were driving out wine out to South Dakota, “don’t you help people with their eyes, Dad?”  “Yes, I do, Mike, but sometimes service means doing something that you don’t normally do to help someone else get what they want.”  The way that Mike is as an adult now, I believe that he understood that simple statement and applies it to his interactions today.

We made it to Milbank, had a nice lunch with Dr. Wischmeier and his staff, delivered the wine and set-off back to Minneapolis.  Mike informed me that he was not going to sleep through it this time and watched road signs intently for the mileage indicator to Darwin, Minnesota.  I had to tell him that it is so small that they don’t include it until you get pretty close.  He got a good lesson in the geography of small town Minnesota along the way.

Finally, we arrive in Darwin, make the turn at the sign pointing to the world’s largest ball of twine, drive a couple of blocks to the “site” and get out of the car to see this: 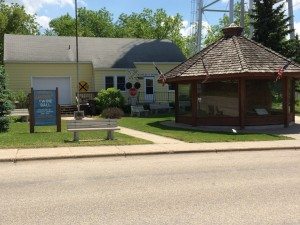 Mike gets out of the Suburban, looks at the ball of twine, looks at me and says, “that’s it, Dad?”  I didn’t know whether to laugh or cry.  Had I just snookered my son into spending a day with me because I didn’t want to be alone and now he’ll have lifetime trust issues?  I hoped that wouldn’t be the case and began looking up close at the display, talking about how much work it took to make it for so long, how dedicated the guy who built it must be, how they moved it, what it probably smelled like in that little enclosure and he says, “I bet it would be cool if you lit it on fire!”  Only an eight year old boy comes up with that sort of a response to seeing such an amazing example of blind human persistence.

In the end, Mike was happy when we stopped at the Dairy Queen to get raspberry malts.  I’m not sure that he was very excited about the “attraction,” but we had a fun day together, we still talk about it today and I am grateful that he came along with me.

In my life, I’ve had lots of great examples for being of service.  I mention three people in this story from whom I have learned a lot about being of service to others, Dick LeClaire, Curt Wischmeier and Mike Gaslin.  I am grateful that all of three of them are still a big part of my life.