A Smile, a Story, a Shine and Service

This is Simmie Hinton. Simmie understands service and storytelling. 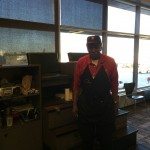 Simmie shines shoes on Councourse G by gate 20 at the MSP Airport. I stopped for a shoe shine on my way to Miami this morning because I had some time and my shoes were looking a bit grungy. 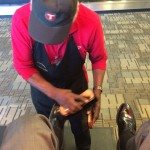 Normally, I shine my shoes at home. Not because I’m cheap, I just kind of enjoy doing it and shining shoes doesn’t take very long.

Back to Simmie. When I walked up to his stand, he had a small bag of miniature Baby Ruth candy bars sitting on his shelf. Baby Ruth is one of my favorite candy bars so even before I had talked to Simmie I knew that he had to be okay. I asked him what they were for and he said, “everybody likes a little something sweet!”

“Yes, they do,” I replied. He had no idea how true that was for me. Simmie greeted me with a big smile, asked me to hop up into the chair and began to perform his service.

On Simmie’s head was a baseball cap with the logo of the Metropolitan Transit Commission (MTC) here in the Twin Cities. I asked him about the cap and he said that he drove a bus for MTC for 26 years and put four kids through college doing it. I told him about when I was in school at the University of Minnesota, we used to ride the route 16A to downtown Minneapolis and called the bus the Big Red Limousine. He got a kick out of that and mentioned that he had driven that route on many occasions. Maybe we crossed paths?

Simmie came to Minneapolis from a farm 80 miles outside of Hattiesburg, Mississippi a long time ago. When he was 17, he began working in the summer with a portable sawmill group. What they did was moved around and harvested timber throughout the state of Mississippi. Simmie was young, strong and willing to work so the foreman of the crew quickly identified him as a rising star, nicknamed him “Slim” and took an interest in working only with him.

As the summer of 1966 wore on, the harvesting opportunities in Mississippi grew few and far between so the crew moved to Georgia to cut timber. It was here that Simmie had the unfortunate mishap with the saw that cost him part of his finger. He didn’t seem bitter about it, described the event matter-of-factly and still referred to the foreman, Mr. Sullivan, in a respectful and almost reverent tone.

Simmie described how the finger had been broken at the tip with a sharp piece of bone protruding and almost no bleeding. The nearest hospital was 50 miles away and during the ride there the finger hardly bled at all. The physician in the ER informed Simmie that with the nature of the injury, he had two options. One was to stitch-up the skin around it and leave a sort of sharp, protruding, almost full-length finger that may “give him some problems.” The other was to amputate the part of the finger past his second knuckle.

When telling this part of the story, Simmie looked up at me and said, “I was a young man of 17, I didn’t want a finger giving me trouble all of my life so I told him to cut the damn thing off and I’ve never missed it.” What a great attitude, he made a decision, accepted the results and just moved on. He seemed grateful for how the foreman took care of him during the accident. When I asked him when he went back to work, he told me that he never went back to the sawmill.

Simmie went back to life on the farm, finished school, moved on with life doing things other than working in a sawmill, got married and had two kids. As a young man filled with constructive discontent and longing for something better, one day Simmie told his wife that he was going to Minneapolis to find work with a relative who lived there, that he’d send for her when he got settled and his wife told him, “ I wouldn’t follow you two steps.” That seems sad, but Simmie didn’t seem to be sad about it at all.

Suddenly, life was different for Simmie, it was in Minneapolis that he learned the art of shining shoes and he had told himself that he wasn’t getting married again. Ever.

That was short lived, Simmie met a woman whom he has now been married to for 36 years, they’ve raised four college-educated kids and he’s been back shining shoes at the MSP Airport for almost 9 years. He found the job because he’d retired, was looking something to do and his wife saw an ad in the paper for shining shoes. She asked Simmie, “Didn’t you used to shine shoes at one point in your life?”

Yes he had. Simmie applied for the job, got it and now greets travelers with a big, humble smile, a kind demeanor and an easy manner about him while he delivers his service. He still talks positively about public transportation, is up on the latest routing and the new trend of the light rail system here in the Twin Cities and speaks fondly of his family.

I am grateful that I ran into Simmie this morning on the way to my flight. I didn’t accept one of the Baby Ruth bars that he offered and still I appreciate a man committed to his trade. Thanks for sharing your story with me, Simmie, you made a ten-minute shoeshine turn into a chance to connect with another person. For that, I am grateful.

And for those of you who travel through Minneapolis-St. Paul via the airport, please look Simmie up on Mondays and Tuesdays on Concourse G by gate 20 and experience his service. I was there at 6:30 am so he’s an early riser.